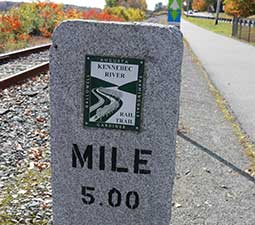 Kennebec River Rail Trail ©Caroline SabanLocated on the western banks of the Kennebec River between Gardiner and Hallowell, Farmingdale is a vibrant residential community with densely populated riverbanks and open rural land. The town was incorporated on April 3, 1852 from parts of South Hallowell, North Gardiner, and West Gardiner.

During the 19th century and before the availability of mechanical refrigeration, many businesses existed in Farmingdale along the Kennebec River, including shipyards, brickyards, pottery, and a glue factory.

A major business on the Kennebec River was harvesting and selling ice worldwide. Ice was cut from the frozen water and stored in warehouses, often insulated with sawdust. When the ice was gone, the river was often clogged with logs floating downstream to paper mills further south.