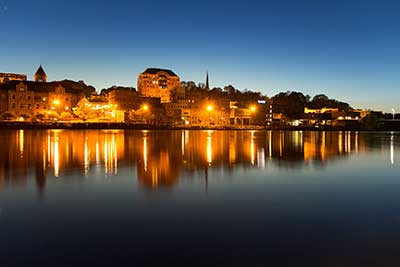 Located on both sides of the Kennebec River at the head of tide, Augusta is one of the United States’ most beautiful capitals. As Maine’s capital city since 1827, Augusta is a city rich in history.

The area was first explored by the Popham Colony in 1607 and was first inhabited by English settlers from the Plymouth Colony in 1628 as a trading post. At this time, the area was known by its Native American name, Cushnoc, meaning “head of the tide.”

From those early days, the city has grown as the center of state and county government, an industrial and trade center, and a center for the region’s health and educational services. Augusta is the center of employment, commerce and service for Central Maine.

Recreational opportunities and cultural activities play an important role of life in Augusta. From outdoor concerts and movies to museums to golf to public and state parks to fishing and hunting to shopping and more, Augusta has all the best Maine has to offer within your reach.

Augusta Board of Trade
www.augustaboardoftrade.org